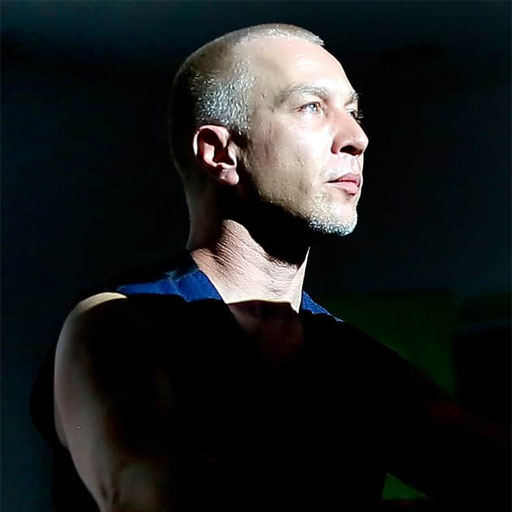 In my youth I experienced a lot of different professions from a driller and a pig farmer to a rock musician and a photographer. In the first year of this century, when I was already 23 years old, I unintentionally found my way in the theatre which I didn’t liked and moreover never considered as a lifetime project. But I ended up studying the performing arts from Mark Weil in his “Ilkhom” theatre in Tashkent, Uzbekistan.

Then I decided to become a director and went to Moscow, where I led a small theatrical project, creating a few diverse performances, including several plays and inhouse film festival.

Having returned in Tashkent I continued my own project Research Laboratory of Illusion, which is based on researching modern arts. I directed several puppets’ plays in the Republican Puppet Theatre of Uzbekistan. I also run the public theatre and taught performing arts in Almalyk town.

In 2012 I came back into the “Ilkhom” Theatre of Mark Weil as an actor and director. Since then I have performed about 15 characters and directed a few plays and scenic improvisations including Adventures S lab multimedia project based on the Diary of Madman by Gogol and texts by V. Kandinsky and J. Dobrynin. The K Castle play based on the Castle novel by F. Kafka and a scenic improvisation Wings of Desire based on the film by Wim Wenders.

More than 20 projects have been performed in the different locations of Uzbekistan by the Research Laboratory of Illusion, the latest of them are: Waiting. Fantasies about Godot an ongoing web-show based on the Waiting for Godot play by Samuel Beckett with the support of Creative Producers Programme of British Council; Meta-stasis project. Chapter 1. Russian Dervish and unsecret knowledge multimedia lecture based on texts by Velimir Khlebnikov, Maksim Fadeev and Sufi poets. Bonum Factum Gallery, Art residence Bukhara with support of Swiss Embassy in Uzbekistan. Bukhara; War of Viruses VR-play based (not exclusively) on the play by Heiner Müller (translation of Natalia Isayeva, adaptation of Anatoly Vasiliyev) on the Rec Room platform with support of Goethe-Institut Taschkent.