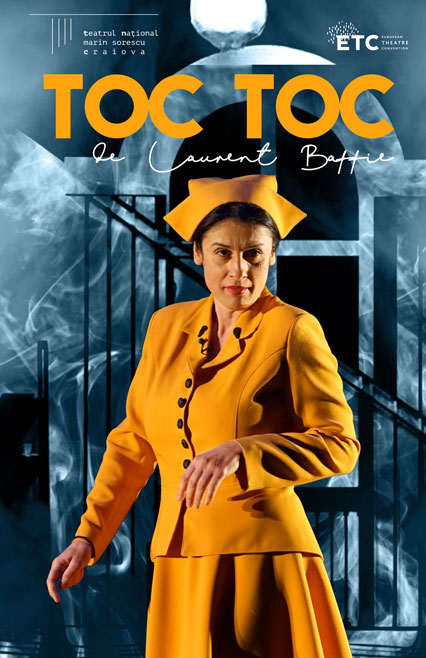 “TOC TOC” is a play written by French playwright and actor Laurent Baffie, and premiered in 2005 at the Palais-Royal in Paris.

A frothy comedy whose action takes place in the office of Dr Stern, a world-renowned neuropsychiatrist in obsessive-compulsive disorder – OCD or OCD. A consultation with the renowned Dr Stern is difficult to obtain, as he travels a great deal and rarely returns to France.

Coprolalia, arrhythmomania, nosophobia, palilalia are just some of the ailments of the six patients who meet in Dr Stern’s waiting room.

The neuropsychiatrist is late, being stuck at Frankfurt airport. After a while, patients will try to kill time by improvising group therapy that will put everyone out of their comfort zone. Everyone will tell their own story.

“The directors (Alexandru Boureanu and Raluca Paun) counted on the success of this boulevard comedy because they relied on two important elements: the text is alertly written, with effective lines and with a comic unfolding rhythm that always includes surprise in its formula; and on the performance of the troupe of actors, capable of giving relief to the lively humour of the piece. Laurent Baffie’s experience as an actor and writer for entertainment shows on radio and television is felt in this text, he gave up school to follow his vocation, being attracted by these two media of our time. Addressing a sensitive and convoluted subject, the playwright resorts to the comic means of the language of popular origin, and this could be a trap for a troupe of actors who can slip beyond the thin line of coarse effect. The TNC actors did not fall into this trap, they generally avoided thick brushes, subtly winking at the audience, who rewarded their performance with applause.”

A frothy comedy set in the office of Dr. Stern, a world-renowned neuropsychiatrist in obsessive-compulsive disorder.

There are currently no reviews for TOC TOC