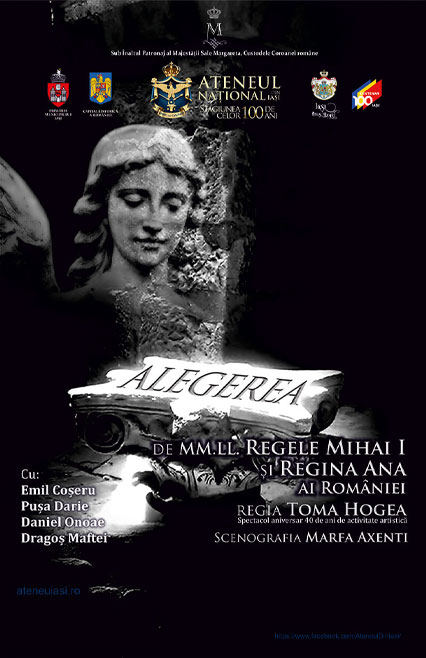 The play “Choice” is a disturbing meditation on man, on his spirit and passions, on all kinds of temptations that try, him, and on the place of the human being in the universe. The allegorical characters utter philosophical lines, loaded with meanings so that the text becomes a confession, written with lucidity, sensitivity, and a fine ability to notice the weaknesses of human nature, but also the area of ​​light that exists in each of us.

The contrast between Ease and Bitterness, the two characters who seek to tempt Man and channel his deeds and intentions, so that he makes a choice, is put on the page with depth, analytical spirit, and psychological finesse. The mentioned dispute between “the two fundamental powers of this planet, called Earth” cannot end otherwise than with the idea that refuge in faith and love represents the only salvation of the human being. “The text “CHOICE”, this history tab, reminds us of Goethe’s fundamental work, FAUST, due to the theme, ideas, and soul turmoil of the main character – THE MAN.

So much for Goethe, but also, in the text “CHOICE”, LIGHT “converses” with DARKNESS! If FAUST overcame his serious mistakes by aspiring to something better, higher, through his inner struggle, THE MAN (the main character) fights between the two great forces/characters (LIGHTNESS and BITTER), with “the burden of the human race” what presses on his shoulders. The text “CHOICE” presents itself as an essay, why not, as an (inner) monologue of the character, THE MAN. The style in which the words are laid out on paper, the unfolding of the action, from a dramaturgical/scenic point of view, challenges us to “invent”, to explore, a certain game space, original and modern (Light and Dark), but in consensus with the words, ideas and experiences of each character. “CHOICE” – IS THE POEM OF MAN, in a torturous struggle with the temptations of those around him, with the harmony and chaos of life, with human aggression, with himself. The text, direction, scenography, music, choreography, light design, and, last but not the least, the ACTORS, we have the privilege but also the responsibility to enliven this “PAGE OF HISTORY” in a national premiere, at the Athenaeum of Iasi, for Their Royal Majesties, for the public from Iași… and not only that! » Toma Hogea, director.

Reviews for: The choice

There are currently no reviews for The choice