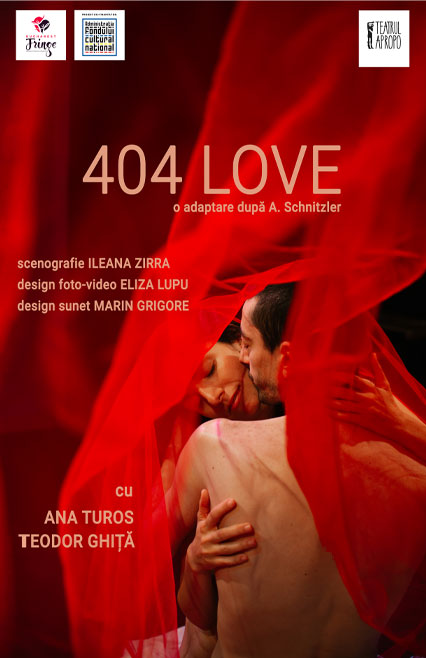 A text by Ana Turos and Teodor Ghiță, inspired by “The Circle” by Arthur Schnitzler and “Blue Room” by David Hare

404 Love is an adaptation of Arthur Schnitzler’s La Ronde, a play that at the beginning of the 20th century caused a scandal of great proportions among Viennese society, being banned immediately after its premiere. The current staging proposes a reinterpretation of the classic text in the context of Bucharest in the 2020s, a society less prudish and sexist, but one in which sex and intimacy are often still taboo subjects.

6 characters form 6 couples in a race for carnal desires, extramarital escapades, individual confirmations, access to other social classes, and exits from the banality of the daily routine. Desire is the engine of this mechanism that closes at the end and exposes personal insecurities, and secrets but also accents of pure sincerity, which appear only at the moment of connection with another person.

Not recommended for people under 18

There are currently no reviews for 404 LOVE